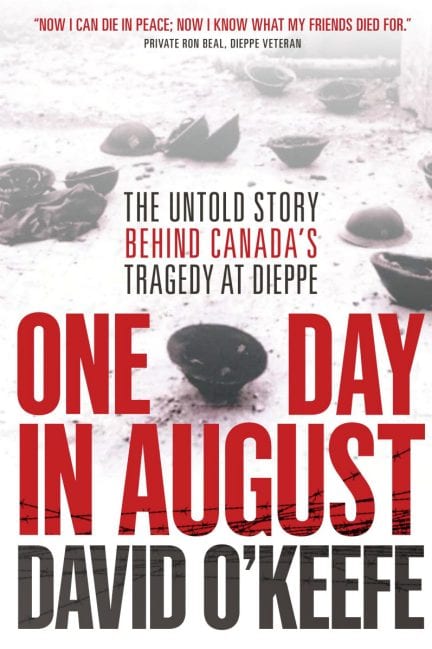 One Day in August

The Untold Story Behind Canada's Tragedy At Dieppe

About One Day in August:

Magnificent and engrossing, One Day in August reveals in full for the first time the “Ultra Secret” story behind one of WW2’s most controversial mysteries—and one of Canada’s most sorrowful moments.

In a narrative as powerful and moving as it is authoritative,  David O’Keefe rewrites history, connecting Canada’s tragedy at Dieppe with an extraordinary and colourful cast of characters—from the young Commander Ian Fleming, later to become the creator of the James Bond novels, and his team of crack commandos to the code-breaking scientists of Bletchley Park (the closely guarded heart of Britain’s wartime Intelligence and code-breaking work) to those responsible for the planning and conduct of the Dieppe Raid—Admiral John Godfrey, Lord Louis Mountbatten, British Prime Minister Winston Churchill and others. The astonishing story critically changes what we thought we knew.

For seven decades, the objective for the raid has been one of the most perplexing mysteries of WWII. In less than six hours on August 19, 1942, nearly one thousand Canadians—as well as British and Americans—lay dead or dying on the beaches around the French seaside town, with over two thousand other Canadians wounded or captured. These awful losses have left a legacy of bitterness, recrimination and controversy. In the absence of concrete reasons for the raid, myriad theories ranging from incompetence to conspiracy developed.

Over almost two decades of research, sifting through countless recently declassified Intelligence documents, David O’Keefe skillfully pieces together the story like a jigsaw puzzle to reveal the prime reason behind the raid: a highly secret mission designed, in one of Britain’s darkest times, to redress the balance of the war. One Day in August provides a thrilling, multi-layered story that fundamentally changes our understanding of this most tragic and pivotal chapter in Canada’s history.

A “Best Book” selection – The Globe and Mail

Mr. O'Keefe has shown once again that he is not only one of the most indefatigable historical researchers, but also is one who can produce remarkable, even astonishing results. There are very few historians in the world who can say they have gotten the British Code Breaking Centre, Bletchley Park, to release what they have previously stoutly refused to yield. O'Keefe has brought forward new evidence of the greatest importance in the debate about whether the Dieppe Raid was a renegade operation or was duly authorized under British Government standards.


O'Keefe has definitely made the biggest breakthrough of the last 20 years in our understanding of the raid, and - thanks to his archival achievements - we can now start seeing whence most of the remaining mysteries about the raid sprang....His principal research achievement is to have kept digging in the British archives with such persistence that the keepers of the British code-breaking secrets conceded that there was no point holding back the remaining records linking Bletchley Park, Ian Fleming and the Dieppe raid.


A masterpiece…. Above all it reads so well. The plot, narrative and characters make it as suspenseful as a novel.

David R. O’Keefe is an award-winning historian, documentarian and professor at Marianopolis College in Westmount, Quebec. He served with the The Black Watch (Royal Highland Regiment) of Canada in Montreal and worked as a Signals Intelligence research historian for the Directorate of History and Heritage (DND). He has also created and collaborated on over 15 documentaries for History Television and appeared on CBC Radio, Global Television, and the UKTV Network in Great Britain. In 2002 he joined forces with Emmy award-winner producer Wayne Abbott; among the television documentaries they have made is Dieppe Uncovered, which aired simultaneously on History Television in Canada and Yesterday TV in the U.K. on 70th anniversary of the raid, to major acclaim.

Other Books by David O'Keefe: