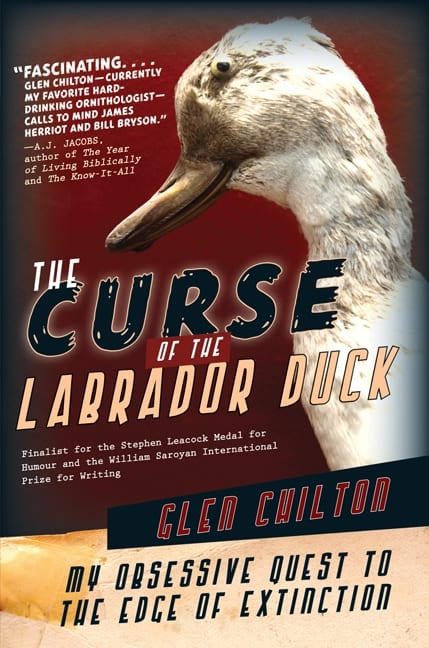 The Curse of the Labrador Duck

My Obsessive Quest to the Edge of Extinction

About The Curse of the Labrador Duck:

Little is known about the Labrador Duck, which once populated eastern North America but has been extinct for more than 100 years. Stuffed specimens, housed under glass in museums and in private collections worldwide, are rare — only 55 are known to exist. Even more rare is the kind of scientist who would, given the task of writing a small species account about the Labrador Duck, travel around the globe more than three times in search of every last stuffed bird. And what about the curse? Everyone who has owned a stuffed specimen has come to a bad end, whether going to jail or dying under mysterious circumstances.

But Chilton is a rare specimen himself, and a biologist with a self-professed obsessive personality. (“They say that some children suck their thumb while still in the womb; I spent those nine months chewing my fingernails.”) His pursuit of the extinct species took him to the ducks’ breeding habitat on Canada’s east coast, as well as on many adventures in Europe and America as he searched museums and personal collections. Over the course of his epic journey, Chilton encountered a colourful flock of scientists, journalists and amateur ornithologists. He also endured numerous hangovers, swam naked in a glacier-fed stream and narrowly avoided arrest in New York City.

The Curse of the Labrador Duck is a quest unlike any other, an impulsive journey around the planet in pursuit of a bird no one in our lifetime has seen alive.

From the wilds of Nova Scotia to the neglected bowels of decrepit museums, Glen Chilton is in relentless pursuit of evidence of the extinct Labrador duck. And the curse? You'll have to read this engaging adventure to find out.


Glen Chilton is one of those great rarities'a serious scientist who knows how to spin a fascinating yarn. The Curse of the Labrador Duck takes readers on a madcap years-long journey, chasing the ghost of the long-lost Labrador Duck. I was drawn in from the start and eagerly followed Chilton's wild ride through every gritty inner-city back road, grungy gin joint, and dilapidated hotel room in North America and Europe in his obsessive quest to find every last Labrador Duck specimen in the world.

Tim Gallagher, author of The Grail Bird: The Rediscovery of the Ivory-Billed Woodpecker


The Curse of the Labrador Duck is a fascinating wild goose chase (where the geese are all dead and aren't technically geese). Glen Chilton--currently my favorite hard-drinking ornithologist--is a wonderful guide, with prose that calls to mind James Herriot and Bill Bryson.

AJ Jacobs, author of The Year of Living Biblically and The Know-It-All


For more than four years, ornithologist Chilton visited 30 cities to examine and document 55 stuffed ducks and 9 eggs, all that remains of the long-extinct Labrador Duck. Stuffed ducks might seem a dry topic, but Chilton finds humor in almost all situations, from cultural clashes to the idiosyncrasies of taxidermists, resulting in an entertaining and educational travelogue...Anyone interested in travel, ecology, ornithology or a well-told story should find Chilton's quest a great read.

Dr. Glen Chilton, Professor Emeritus at St. Mary’s University College in Calgary, Alberta, and Adjunct Senior Lecturer at James Cook University, Australia, is an internationally recognized ornithologist. Chilton is the world’s leading authority on the extinct Labrador Duck. When the Smithsonian has a question about the Labrador Duck, they come to him. Chilton’s detective work for The Curse of the Labrador Duck took him the equivalent of 3.3 times around the world. Chilton resides in Australia.

Other Books by Glen Chilton: