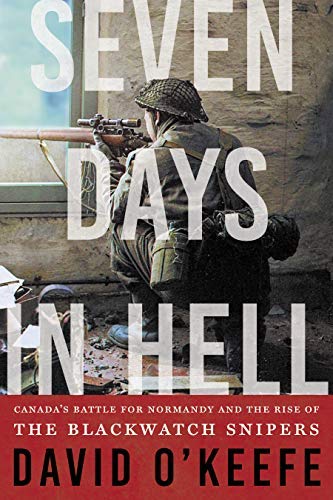 About Seven Days in Hell:

Centred around one of Canada’s most storied regiments, Seven Days in Hell tells the epic story of the men from the Black Watch during the bloody battle for Verrières Ridge, a dramatic saga that unfolded just weeks after one of Canada’s greatest military triumphs of the Second World War.

O’Keefe takes us on a heart-pounding journey at the sharp end of combat during the infamous Normandy campaign. More than 300 soldiers from the Black Watch found themselves pinned down, as the result of strategic blunders and the fog of war, and only a handful walked away.

Thrust into a nightmare, Black Watch Highlanders who hailed from across Canada, the United States, Great Britain and the Allied world found themselves embroiled in a mortal contest against elite Waffen-SS units and grizzled Eastern Front veterans, where station, rank, race and religion mattered little, and only character won the day.

Drawing on formerly classified documents and rare first-person testimony of the men who fought on the front lines, O’Keefe follows the footsteps of the ghosts of Normandy, giving a voice yet again to the men who sacrificed everything in the summer of 1944.

David R. O’Keefe is an award-winning historian, documentarian and professor at Marianopolis College in Westmount, Quebec. He served with the The Black Watch (Royal Highland Regiment) of Canada in Montreal and worked as a Signals Intelligence research historian for the Directorate of History and Heritage (DND). He has also created and collaborated on over 15 documentaries for History Television and appeared on CBC Radio, Global Television, and the UKTV Network in Great Britain. In 2002 he joined forces with Emmy award-winner producer Wayne Abbott; among the television documentaries they have made is Dieppe Uncovered, which aired simultaneously on History Television in Canada and Yesterday TV in the U.K. on 70th anniversary of the raid, to major acclaim.

Other Books by David O'Keefe: