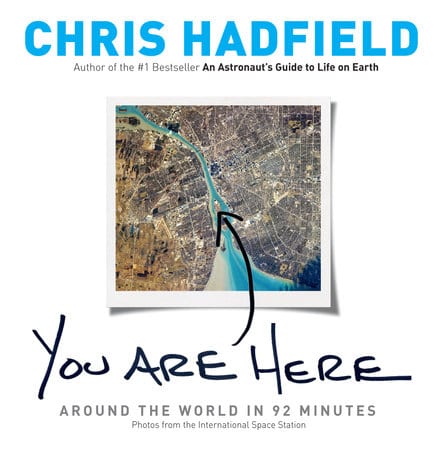 Around the World in 92 Minutes: Photos from the International Space Station

About You Are Here:

In You Are Here, astronaut Chris Hadfield creates a surprisingly intimate and compelling visual essay about the planet we live on, choosing the best from the thousands of photos he took on the International Space Station.

Chris Hadfield’s new book shows us our home–our city, country, continent, our whole planet–from a unique perspective. The millions of us who followed Chris’s Twitter feed from the ISS thought we knew what we were looking at when we saw his photos. This photo documentary shows us we didn’t. We caught the beauty but missed the meaning. Curated from images never before shared, Chris’s big picture reveals why our planet looks the way it does and why we live where we do. Chris sees more in these images than we do, not just because he’s spent months in space but because his in-depth knowledge of geology, geography and meteorology allows him to read the mysteries the photos reveal.

Divided by continent, You Are Here represents one (idealized) orbit of the ISS. This planetary photo tour–surprising, playful, thought-provoking and visually delightful–is punctuated with fun, fascinating commentary on life in zero gravity, too. In the spirit of his #1 bestselling An Astronaut’s Guide to Life on Earth, You Are Here opens a singular window on our planet, using remarkable photographs to illuminate the history and consequences of human settlement, the magnificence (and wit) of never-before-noticed landscapes, and the power of the natural forces shaping our world and the future of our species.

Is there a person left on the internet who hasn't yet swooned over astronaut Chris Hadfield's jaw-dropping images from space? Here's a chance to have them in your home.... While we've seen plenty of NASA images of our planet, Hadfield's instantly feel more personal. These photos were taken by a curious human, not as part of a larger organizational mandate. Hadfield was capturing his photos not necessarily as a scientist, but more as a zero-gravity sightseer on behalf of all civilization.