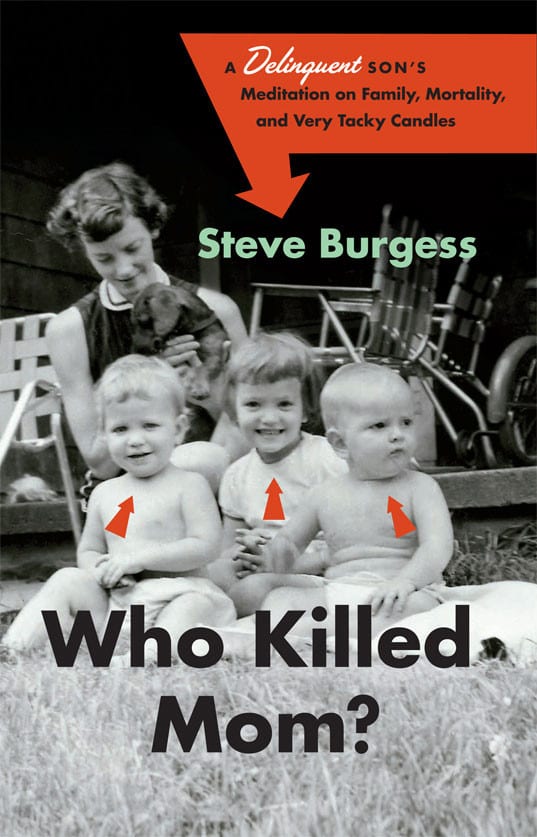 About Who Killed Mom?:

One of Canada’s funniest writers, Steve Burgess, tackles his mother’s life and death in a profound, entertaining story.

Memoir, biography, and outrageous comedy make for a perfect blend in the debut book from acclaimed writer. Telling the tale of his mother’s life and death, and along the way laying bare his own struggles as a troubled teenager, Burgess delivers a moving meditation on life and family.

The author’s mother, Joan, barely survived her thirteenth birthday: a rare disorder had made it almost impossible for her to swallow food. Her battle to survive this illness was the first in a lifelong struggle with the demons of her upbringing. As she raised her five children, of whom the author is the youngest, Joan revealed herself to be a strong and remarkably complex woman, despite being a sick parent. This is the story of her family: Joan herself, her husband — a charming United Church minister — and their children, including the alarmingly delinquent Steve.

Who Killed Mom? brims with uproarious anecdotes and one-liners. Whether he’s relating how an ice cream product saved him from a gruesome death on the Trans-Canada, sizing up the rebranding efforts of a woeful Manitoba motel, or depicting daily life in a retirement community, Burgess infuses his tales with plenty of humour. But beneath the book’s hilarity is a penetrating examination of eternal themes: family, mortality, fate, and the enduring value of love.

I laughed, I cried. And then I laughed again. I was a willing companion on a trip through the life and times of the Burgess family. And Joan, the mom, is the kind of hero we meet everyday--and may even live with. Steve Burgess is a master storyteller. The candles may be tacky, but the writing is incandescent.

Shelagh Rogers, Host of The Next Chapter on CBC Radio One


Steve Burgess has invented a brand new genre-the sentimental whodunnit. The usual suspects, time and physical decline, get fingered from the start, but this self-deprecating sleuth, a master of the quick crack of the quip, saves the biggest mystery for last. Namely: how can a family tragedy be told with so much redemptive wit?

Taras Grescoe, author of Bottomfeeder: How to Eat Ethically in a World of Vanishing Seafood