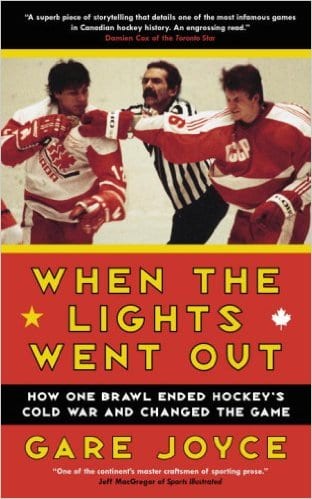 When the Lights Went Out

About When the Lights Went Out:

When the Lights Went Out tells the story of a moment in the 1987 World Junior Championship that forever changed the lives of the players involved, and ignited a debate that has yet to subside about the way the game is meant to be played.

When Team Canada skated onto the ice that night in Piestany, Czechoslovakia, they thought they were 60 minutes away from a gold medal. Future superstars like Brendan Shanahan and Theo Fleury, pitted against Russians like Alexei Fedorov and Alex Mogilny, dreamed of returning to Canada in glory. Instead, they were sent home empty-handed, bearers of a legacy that would follow them throughout their careers.

No one who saw it will ever forget it. The mere mention of Piestany evokes the image of twenty fights breaking out all over the ice as players rushed to their mates’ defence, of haymakers, stick-swinging, and even kicking, of a referee skating off the ice in shame.

ESPN hockey writer Gare Joyce tells the story of the game that marked the last time Canadian and Soviet players squared off as enemies, rather than potential team mates in the NHL. It tells the stories of the combatants on the ice. Of the coaches behind the bench. Of officials, international hockey executives, members of the media and even politicians who were caught up in the intrigue.

As smart as he is stylish, and as ingenious as he is thorough, Gare Joyce is one of this continent's master craftsmen of sporting prose. He is as fine a writer as can be found in any field.


It's taken twenty years for someone to turn the lights back on in Piestany. Leave it to Gare Joyce to make it worth the wait.


Gare Joyce is often said to be one of the best sports writers on the continent, and his engaging and colourful style proves it.

Gare Joyce, described by Sports Illustrated as “one of this continent’s master craftsmen of sporting prose,” is a writer for ESPN The Magazine , a sports correspondent for The Christian Science Monitor and a contributor to several other magazines. He has won four National Magazine Awards and been a finalist 19 times. He has written three books, Sidney Crosby: Taking the Game by Storm, The Only Ticket Off the Island: Baseball in the Dominican Republic, and When the Lights Went Out: How One Brawl Ended Hockey’s Cold War and Changed the Game.

Other Books by Gare Joyce: