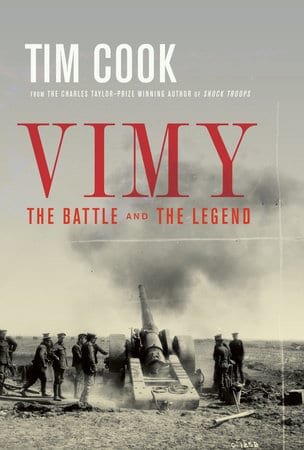 The Battle and the Legend

A bold new telling of the defining battle of the Great War, and how it came to signify and solidify Canada’s national identity

Why does Vimy matter? Tim Cook, Canada’s foremost military historian and a Charles Taylor Prize winner, examines the battle of Vimy Ridge in April 1917 and the way the memory of it has evolved over 100 years. Vimy is unlike any other battle in Canadian history: it has been described as the “birth of the nation.” But the meaning of that phrase has never been explored, nor has any writer explained why the battle continues to resonate with Canadians. The Vimy battle that began April 9, 1917, was the first time the four divisions of the Canadian Expeditionary Force fought together. 10,600 men were killed or injured over four days–twice the casualty rate of the Dieppe Raid in August 1942.

Cook has uncovered new material and photographs from official archives and private collections across Canada and from around the world. Many of these resources have never been used before by other historians, writers, or film-makers.

This new book is about more than a defining battle: it is a story of Canadian identity and memory, by a writer who brings history alive.

#1 National Bestseller – The Globe and Mail

Through this book, Cook — who has now written nine Canadian military tomes — cements himself as the nation’s premier military historian.


[Cook] is clearly a master at handling vast amounts of information and winnowing it down to a highly-readable, interesting and informative narrative...There is no one better equipped to retell the Vimy story than Cook.


An admirable, balanced and very readable study that catches the elusive power this First World War battle and monument have had in our history.