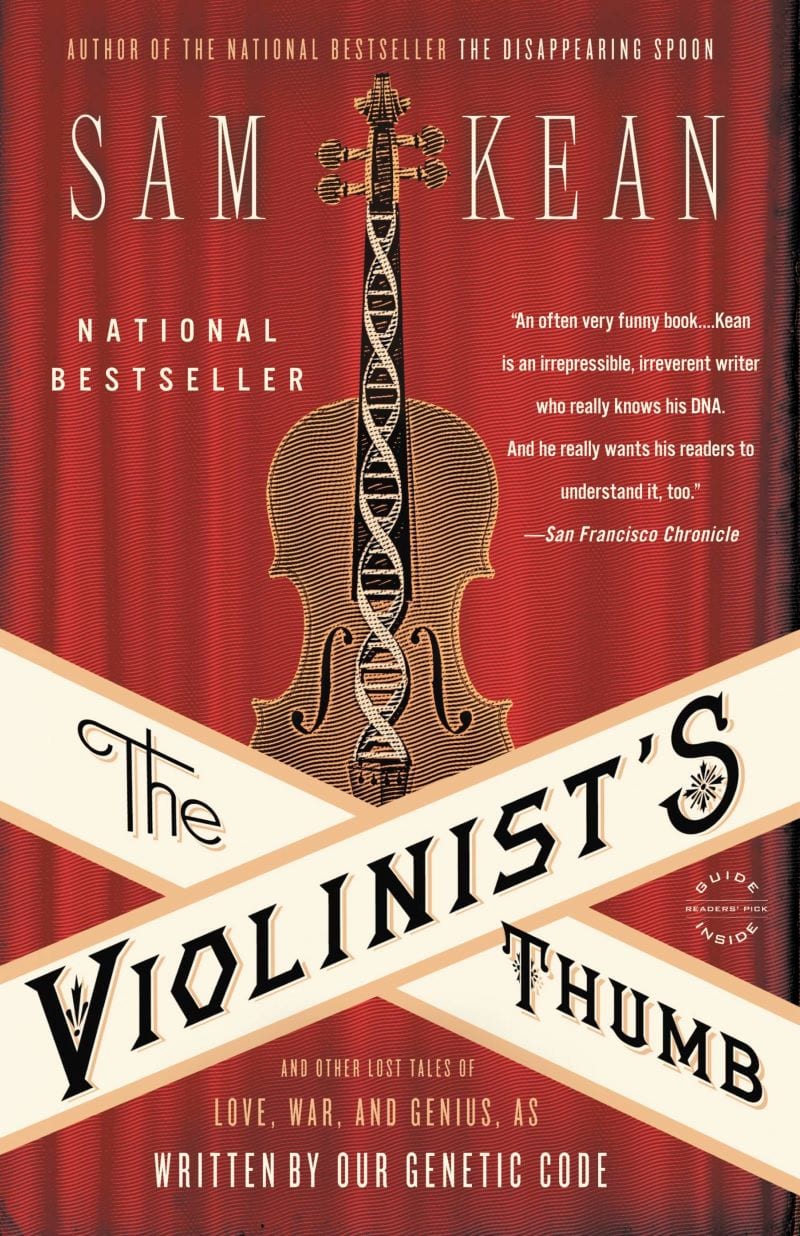 And Other Lost Tales of Love, War, and Genius, as Written by Our Genetic Code

About The Violinist’s Thumb:

From New York Times bestselling author Sam Kean comes incredible stories of science, history, language, and music, as told by our own DNA.

In The Disappearing Spoon, bestselling author Sam Kean unlocked the mysteries of the periodic table. In The Violinist’s Thumb he explores the wonders of the magical building block of life: DNA.

There are genes to explain crazy cat ladies, why other people have no fingerprints, and why some people survive nuclear bombs. Genes illuminate everything from JFK’s bronze skin (it wasn’t a tan) to Einstein’s genius. They prove that Neanderthals and humans bred thousands of years more recently than any of us would feel comfortable thinking. They can even allow some people, because of the exceptional flexibility of their thumbs and fingers, to become truly singular violinists.

Sam Kean has started to make a habit of taking scientific subjects that inhabit the outskirts of the popular imagination and reintroducing them with healthy doses of history and humanity....Anyone reading this fine book could be excused for jolting upright...with wide-eyed amazement.


As he did in his debut bestseller, The Disappearing Spoon, Sam Kean educates readers about a facet of science with wonderfully witty prose and enthralling anecdotes....Kean's thoughtful, humorous book is a joy to read.


[Kean] writes with a humor and humanity that make him poised to become the next Brian Greene, maybe, or Oliver Sacks-explaining small corners of the universe one case study at a time."


Kean is one of America's smartest and most charming science writers, and his new book could be perfect for summer readers who prefer some substance with their fun.


[T]he best science teacher you never had. Kean's accessible genetic overview, written for the layman, is often as simple and elegant as a double helix.


Born to parents named Gene and Jean, Sam Kean got enough ribbing in school science classes to develop an early aversion to genetics. Lucky for us, curiosity overcame conditioning as he became increasingly fascinated with the role DNA plays in shaping destiny. As he did in The Disappearing Spoon, a captivating chronicle of human interactions with each periodic element, Kean has created another page-turning scientific history in The Violinist’s Thumb. With fluid gusto, he turns the discovery of DNA into riveting human drama, then unfurls a series of anecdotes that expand our understanding of genetic influence on our lives as (sometimes uniquely gifted) individuals, from presidents to physicists to violin virtuosos with exceptionally dexterous digits. Kean illuminates clues embedded in our genes that help map the meandering trajectory of our species, then leaves readers with the distinct impression that all this has been a fantastic preamble to our species’ most thrilling (and likely chilling) chapter: manipulating our DNA to remake future humans, and all life on Earth