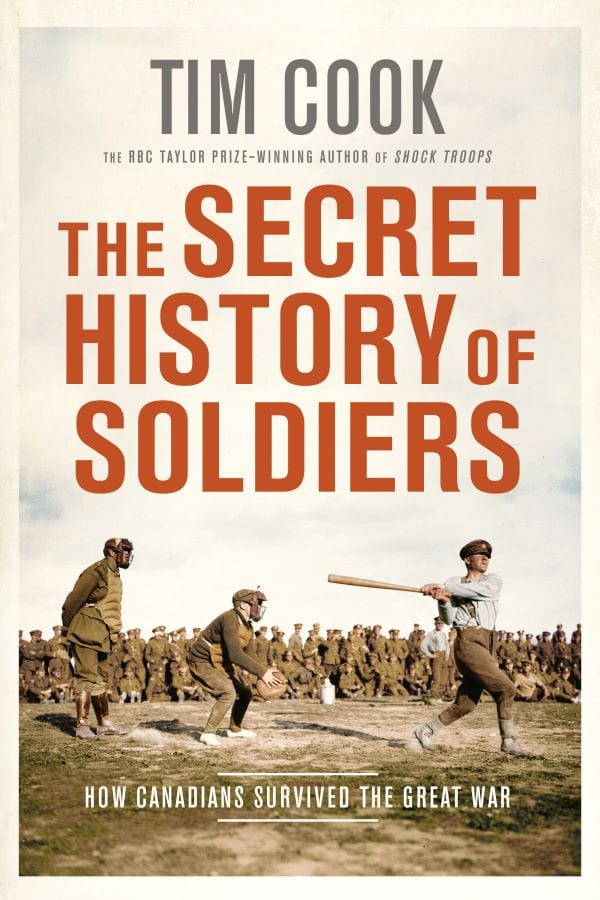 The Secret History of Soldiers

How Canadians Survived The Great War

About The Secret History of Soldiers:

Tim Cook, Canada’s foremost military historian, offers a surprising portrayal of how soldiers found solace, distraction and entertainment to escape the horrors of the trenches during the Great War.

There have been thousands of books on the Great War, and hundreds on Canada’s part in the conflict, but most of these have focused on commanders, battles, strategy, and tactics. Less attention has been paid to the daily lives of the combatants, how they coped with and endured the unimaginable conditions of what was then modern industrial warfare: the rain of shells, bullets, and chemical agents. The Secret History of Soldiers examines how those who managed to survive the horrific conditions of trench warfare on the Western Front found solace, relief, distraction and even entertainment.

Over the years, both writers and historians have overlooked this aspect of soldiers’ lives, as there are no official histories or records. These tales come from the soldiers themselves, captured in letters, diaries, memoirs, and oral accounts. The recollections and artifacts of more than five hundred soldiers form the basis of this book; they include such rare resources as trench art, postcards, and even songsheets. Each piece of history is a reminder that these battles were fought by living, breathing human beings who, when they weren’t engaged in battle, needed escapist activities to counter the daily horrors of trench life. It is those eyewitnesses to the bloodshed and carnage who act as guides to the Great War.

The world they introduce readers to isn’t limited to the harrowing struggle to another day. Cook catalogues the violence of war, but also the gallows humour the soldiers employed to get through it. The Great War was a devastating event, but another layer of life that included songs, skits, art, and even newspapers existed on and behind the battle lines.

With his trademark narrative abilities, Cook has created another landmark history of Canadian military life.