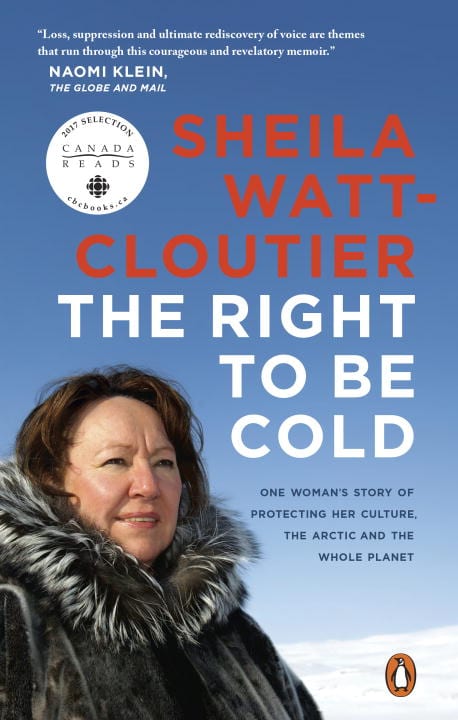 The Right To Be Cold

One Woman's Story of Protecting Her Culture, the Arctic and the Whole Planet

About The Right To Be Cold:

The Right to Be Cold is a human story of resilience, commitment, and survival told from the unique vantage point of an Inuk woman who, in spite of many obstacles, rose from humble beginnings in the Arctic community of Kuujjuaq, Quebec—where she was raised by a single parent and grandmother and travelled by dog team in a traditional, ice-based Inuit hunting culture—to become one of the most influential and decorated environmental, cultural, and human rights advocates in the world.

The Right to Be Cold explores the parallels between safeguarding the Arctic and the survival of Inuit culture—and ultimately the world—in the face of past, present, and future environmental degradation. Sheila Watt-Cloutier passionately argues that climate change is a human rights issue and one to which all of us on the planet are inextricably linked. The Right to Be Cold is the culmina­tion of Watt-Cloutier’s regional, national, and international work over the last twenty-five years, weaving historical traumas and current issues such as climate change, leadership, and sustainability in the Arctic into her personal story to give a coherent and holistic voice to an important subject.

Book of the Year Selection – The Globe and Mail

Sheila Watt-Cloutier is one of the world’s most recognized environmental and human rights advocates. In 2007, she was nominated for the Nobel Peace Prize for her advocacy work in showing the impact global climate change has on human rights, especially in the Arctic. In addition to her Nobel nomination, Watt-Cloutier has been awarded the Aboriginal Achievement Award, the UN Champion of the Earth Award, and the prestigious Norwegian Sophie Prize. She is also an officer of the Order of Canada. From 1995 to 2002, she served as the elected Canadian president of the Inuit Circumpolar Council (ICC), and in 2002, she was elected international chair of the council. Under her leadership, the world’s first international legal action on climate change was launched with a petition to the Inter-American Commission on Human Rights.

“
Loss, suppression and ultimate rediscovery of voice are themes that run through this courageous and revelatory memoir.
”

Naomi Klein, author of No Logo, The Shock Doctrine, and This Changes Everything

“
No one writes about the Arctic with more authority than Sheila Watt-
Cloutier. The Right to Be Cold is an essential addition to the literature of climate change.
”

“
Sheila Watt-Cloutier’s personal stories put a cultural face and human
voice on climate change. She gracefully communicates the ethical
imperative that encourages the move from understanding to action.
”

Will Steger, founder of Climate Generation: A Will Steger Legacy

“
Sheila Watt-Cloutier combines traditional wisdom, the tools of science
and law, and head, heart, and spirit to tell a powerful story we need to
hear.
”

“
The Right to Be Cold captures one Inuk woman’s struggle for identity and the courage to adapt while staying grounded in cultural values and bringing hope to the world.
”

“
This is a book that needs to be read as the North becomes central to our future. It offers a perspective grounded in the culture and wisdom of northern people, seen through the lens of a remarkable woman as they seek to preserve The Right to be Cold.
”

“
This is a moving and passionate story from a committed woman who has bridged the ice age to the digital age. Her sophisticated views on the environment and the way the world works from her engaged involvement are brilliant and convincing.
”