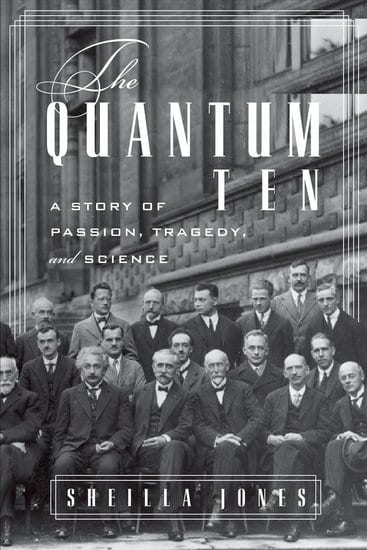 A Story of Passion, Tragedy, Ambition and Science

About The Quantum Ten:

Theoretical physics is in trouble.

At least that’s the impression you’d get from reading a spate of recent books on the continued failure to resolve the 80-year-old problem of unifying the classical and quantum worlds. The seeds of this problem were sewn eighty years ago when a dramatic revolution in physics reached a climax at the 1927 Solvay conference in Brussels.

It’s the story of a rush to formalize quantum physics, the work of just a handful of men fired by ambition, philosophical conflicts and personal agendas. Sheilla Jones paints an intimate portrait of the ten key figures who wrestled with the mysteries of the new science of the quantum, along with a powerful supporting cast of famous (and not so famous) colleagues.

The Brussels conference was the first time so many of the “quantum ten” had been in the same place: Albert Einstein, the lone wolf; Niels Bohr, the obsessive but gentlemanly father figure; Max Born, the anxious hypochondriac; Werner Heisenberg, the intensely ambitious one; Wolfgang Pauli, the sharp-tongued critic with a dark side; Paul Dirac, the silent Englishman; Erwin Schrödinger, the enthusiastic womanizer; Prince Louis de Broglie, the French aristocrat; Pascual Jordan, the ardent Aryan nationalist, who was not invited; and Paul Ehrenfest, who was witness to it all.

This is the story of quantum physics that has never been told, an equation-free investigation into the turbulent development of the new science and its very fallible creators, including little-known details of the personal relationship between the deeply troubled Ehrenfest and his dear friend Albert Einstein. Jones weaves together the personal and the scientific in a heartwarming—and heartbreaking—story of the men who struggled to create quantum physics … a story of passion, tragedy, ambition and science.

"The Quantum Ten illuminates a neglected chapter in the history of physics, and Jones tells the story with enthusiasm and flair. Above all, she gives the reader a real feeling for the personalities behind the science, a look at the minds of 10 passionate thinkers who changed our world forever."


"Anyone interested in the emergence of quantum physics and the debates about its foundations will be thrilled by the controversies among its protagonists. So far, no one has portrayed that crucial episode of 20th century physics is such an easily read, down-to-earth manner as Jones."


"The eminently readable result brings to life characters like the caustic Wolfgang Pauli and the womanising Schrödinger."


"Well written and easy to read, as one would expect from someone with a long and distinguished career as a journalist...it illuminates an important part of our [physics] history in a way that our textbooks don't."


"Jones's clear-headed prose does a good job of outlining the heady physics that [the quantum ten] theorized, but the strength of her book is in reminding us that physics is more than just experiments or equations on a dusty chalkboard. Many of these men have been mythologized, but in this book they are seen as human - crippled by personal flaws, often ruled by self-interest, and on occasion, brought down by a world not entirely kind to the pursuit of science."


"Many books have been written about the development of quantum physics, but most writers have either ignored the personal lives of these individuals or bestowed on them a kind of sainthood, skimming over their follies, the dark side of their personalities and the seedier incidents in which they became involved. Not so Jones. She weaves in the sort of juicy details that today make headline stories in the tabloids devoted to celebrities. And she has good material to work with."


"The Quantum Ten is a book about the history of quantum physics unlike any other...a story that is accessible, exciting, as well as compelling...The book elegantly interweaves the lives of the main characters into a riveting tale of friendship and rivalry, ambition and frustration. This book is highly recommended to those with an interest in the people behind one of the greatest revolutions in human thought."﻿

Sheilla Jones is an award-winning science journalist with an advanced degree in theoretical physics. She regularly reviews science books for a number of publications, including The Globe and Mail.