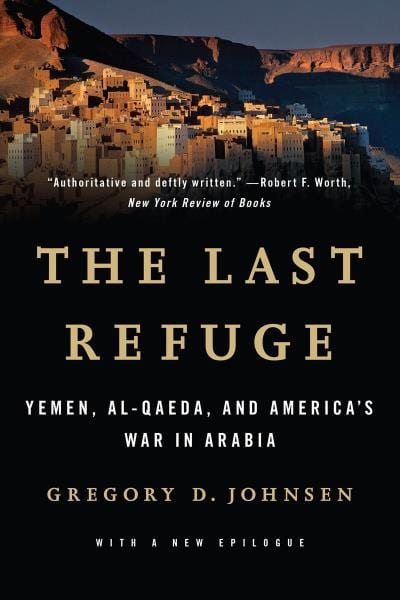 About The Last Refuge:

Far from the battlefields of Iraq and Afghanistan, the United States and al-Qaeda are fighting a clandestine war of drones and suicide bombers in an unforgiving corner of Arabia.

The Last Refuge charts the rise, fall, and resurrection of al-Qaeda in Yemen over the last thirty years, detailing how a group that the United States once defeated has now become one of the world’s most dangerous threats. An expert on Yemen who has spent years on the ground there, Gregory D. Johnsen uses al-Qaeda’s Arabic battle notes to reconstruct their world as they take aim at the United States and its allies. Johnsen brings readers inside al-Qaeda’s training camps and safe houses as the terrorists plot poison attacks and debate how to bring down an airliner on Christmas Day. The Last Refuge is an eye-opening look at the successes and failures of fighting a new type of war in one of the most turbulent countries in the world.

A break-through book on one of the most under-reported and misunderstood stories of the post 9-11 era. Penned in gripping prose and with incredible attention to detail, The Last Refuge unfolds with the pace of an action novel. But this story is all too true.

Jeremy Scahill, author of the international bestseller, Blackwater: The Rise of the World's Most Powerful Mercenary Army


An authoritative and deftly written account of al-Qaeda’s Yemeni incarnation.


The Last Refuge offers a valuable look at al-Qaeda’s operational history in Yemen. Gregory Johnsen has done us all a service by explaining the country, the threats, and why we should pay attention.

Ali H. Soufan, author of The Black Banners: The Inside Story of 9/11 and the War Against al-Qaeda


A wonderfully well written and deeply reported account of the only al-Qaeda affiliate that continues to pose a real threat to the West.

Peter L. Bergen, author of Manhunt: The Ten-Year Search for Osama bin Laden from 9/11 to Abbottabad

Gregory Johnsen is one of the world’s foremost experts on Yemen. A former Fulbright Fellow, he has testified before the Senate Foreign Relations Committee and made presentations about Yemen to the CIA, FBI, National Security Agency, the U.S. State Department, and the U.S. Department of Defense. He has been a guest on The Charlie Rose Show, PBS’ Newshour, CNN, Al-Jazeera English, National Public Radio, BBC, and CBS Radio, to name a few. He has been quoted multiple times in the New York Times, Washington Post, Time, the Guardian, the Independent, the Wall Street Journal, and many other publications.