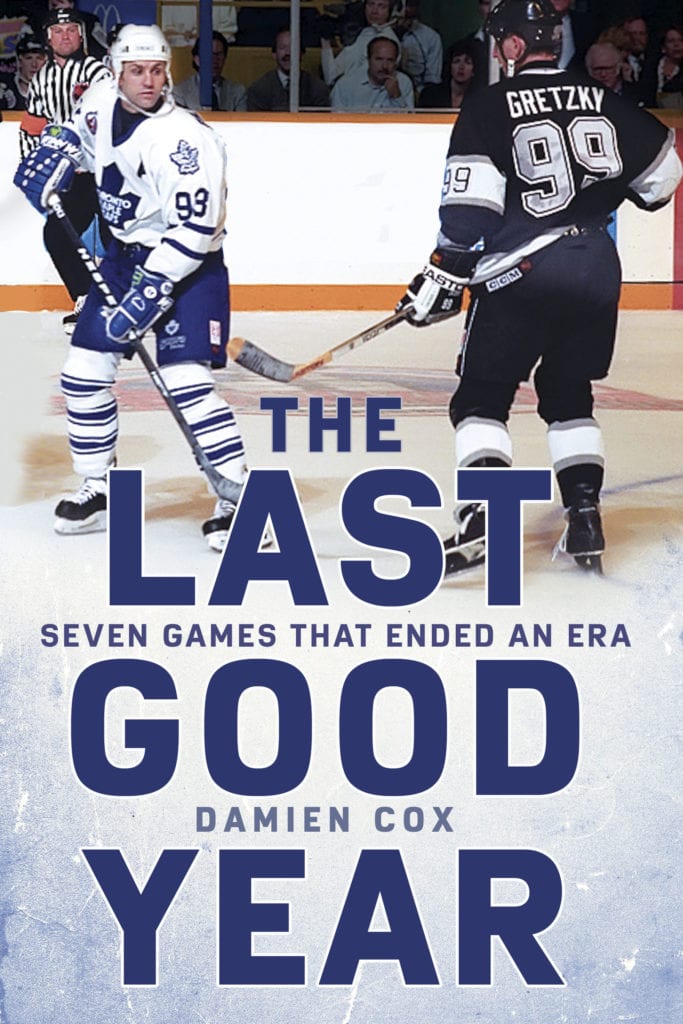 Seven Games That Ended An Era

About The Last Good Year:

We may never again see a series like it.

Before Gary Bettman, the lockouts, and the explosion of salaries. Before all the NHL’s old barns were torn down to make way for bigger, glitzier rinks. Before expansion and parity across the league, just about anything could happen on the ice, and often did. It was an era when huge personalities dominated the sport, and willpower was often enough to win games. And in the spring of 1993, some of the biggest talents and biggest personalities were on a collision course.

The Cinderella Maple Leafs had somehow beaten the mighty Red Wings and then, just as improbably, the St. Louis Blues. Wayne Gretzky’s Kings had just torn through the Oilers and the Flames. When they faced each other in the conference final, the result would be the series Gretzky called the best he ever played–a series that fans still talk about passionately 25 years later.

Told through the stories of seven central characters, The Last Good Year gives an intimate account not just of an era-defining seven games, but of what the series meant to the men who were changed by it: Marty McSorley, the tough guy who took his whole team on his shoulders; Doug Gilmour, the emerging superstar; celebrity owner Bruce McNall; Bill Berg, best-known checking winger in the world; Kelly Hrudy, the Kings’ goalie who would go on to become a Hockey Night in Canada broadcaster; Kerry Fraser, who would become the game’s most infamous referee; and two very different captains, Toronto’s bull in a china shop, Wendel Clark, and the immortal Wayne Gretzky.

Taking us back to that feverish spring, Damien Cox also takes us behind the scenes and into the lives of those who shone brightest during those two weeks: players who made Herculean efforts to spur on the team, from dropping the gloves to spectacular goals and saves when they were most needed, and the referee whose view of one play changed history for a generation of fans.

Fast-paced, authoritative, and galvanized by the same love of the game that made the series so unforgettable, The Last Good Year is a glorious testament to a moment hockey fans will never forget.

To quote the great Bob Cole: ‘Everything is happening!’ in The Last Good Year. A historic franchise finally on the verge of returning to glory after almost three dark decades wandering through the wilderness, challenged by a team that seems to represent everything new and glitzy about sport in the 1990s, owned by charming super-salesman who also happens to be a crook, and captained by the greatest player of all time. Sounds like fiction, but it wasn’t, and anyone who had the pleasure of covering the 1993 Stanley Cup semi-final between Toronto Maple Leafs and Los Angeles Kings will never forget it....This is my favourite hockey book in a long while


In the spring of 1993, I was leaving university for the world of sports journalism—expected to view the world with a more critical eye. Those NHL playoffs were the last I watched as a fan. There’s been so much written and said about this series that you think you’ve heard it all. Not true. Damien uncovered so much I didn't know, bringing back all those memories. Awesome to relive them once again.


Masterful. Damien Cox captures the detail and intensity of one of the most intense playoff series ever played, one all of us in the business remember. He knows the background stories and tells them in his usual style: tough, but fair. A must-read for any hockey fan.

Damien Cox is a veteran journalist/broadcaster who is currently the co-host of Canada’s top-rated radio sports program, Prime Time Sports on Sportsnet The Fan 590. He worked for 29 years as a columnist/reporter at The Toronto Star, covering the Maple Leafs and the NHL for 25 seasons, currently contributes a twice-weekly column to the newspaper, and also writes for Sportsnet.ca. For the past two years, he was a regular contributor to Hockey Night in Canada and on all Rogers Sportsnet hockey shows for the past four years. Cox has written or co-written books on the 1967 Maple Leafs, Alexander Ovechkin, and Martin Brodeur, and has covered multiple Stanley Cup finals, Olympics, World Cups, Wimbledon tennis tournaments, and countless other major international competitions.

“
Damien Cox has done a beautiful job of weaving the times, the personalities and the games themselves into a multi-layered narrative.
”