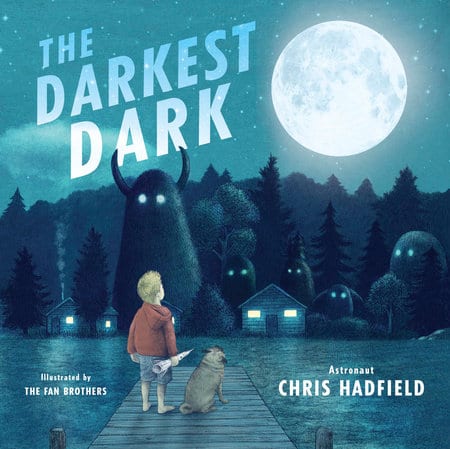 About The Darkest Dark:

Inspired by the childhood of real-life astronaut Chris Hadfield and brought to life by Terry and Eric Fan’s lush, evocative illustrations, The Darkest Dark will encourage readers to dream the impossible.

Chris loves rockets and planets and pretending he’s a brave astronaut, exploring the universe. Only one problem–at night, Chris doesn’t feel so brave. He’s afraid of the dark.

But when he watches the groundbreaking moon landing on TV, he realizes that space is the darkest dark there is–and the dark is beautiful and exciting, especially when you have big dreams to keep you company.

The Darkest Dark soars as an inspiration for children trying to overcome a fear as well as dreamers wondering if they will triumph. Of course, the lesson here is ageless.


A splendid story for soothing night fears, fostering future explorers, and teaching children that not even the sky’s the limit when it comes to dreaming big.


This book goes down like lemon pudding...It’s a great story. And those Fan Brothers! Oh my. Their tender palette, soft textures, serene compositions, yesteryear sensibility — it’s all mesmerizing. Then they go ahead and drop in the most adorably-spooky aliens you could imagine. Capture the glowing magic of the moon. Charm us with a darling pug. And blast imagination into our dreams. A-ma-zing.

Chris Hadfield is one of the most seasoned and accomplished astronauts in the world. In May, Hadfield returned to Earth after serving as Commander of the International Space Station, where he and his crew lived for six months (it was his third trip). The top graduate of the U.S. Air Force test pilot school in 1988 and U.S. Navy test pilot of the year in 1991, Hadfield was selected to be an astronaut in 1992. He served as Director of NASA Operations in Star City, Russia from 2001-2003, Chief of Robotics at the Johnson Space Center in Houston from 2003-2006 and Chief of International Space Station Operations there from 2006-2008. The former President of the Association of Space Explorers (2007-2011), Hadfield is also a fully qualified flight engineer cosmonaut, is fluent in Russian, and is designated a “specialist” on all Space Station systems, meaning that he has earned the highest qualification level possible for every imaginable task onboard.

Kate Fillion is a bestselling author and journalist who lives in Toronto with her two sons.

Terry Fan received his formal art training at Ontario College of Art and Design in Toronto. His work is a blend of traditional and contemporary techniques, using ink or graphite mixed with digital. He spends his days (and nights) creating magical paintings, portraits and prints. Together with his brother Eric, he wrote and illustrated the critically-acclaimed picture book, The Night Gardener.

Eric Fan is an artist and writer who lives in Toronto, Canada. He attended the Ontario College of Art and Design where he studied illustration, sculpture and film. He has a passion for vintage bikes, clockwork contraptions and impossible dreams. His widely-praised debut picture book, The Night Gardener, was a collaboration with his brother Terry.

“
The Fans’ whimsical illustrations of nighttime scenes, in a dusky twilight palette, help illustrate Chris’ fears as well as his excitement about the boundless possibilities of exploration in the dark. A warm and empowering story of triumph over fears
”

“
The idea that a famous astronaut was once afraid of the dark may win some recalcitrant bed-goers’ hearts, and readers with dreams of space travel will jump at this.
”