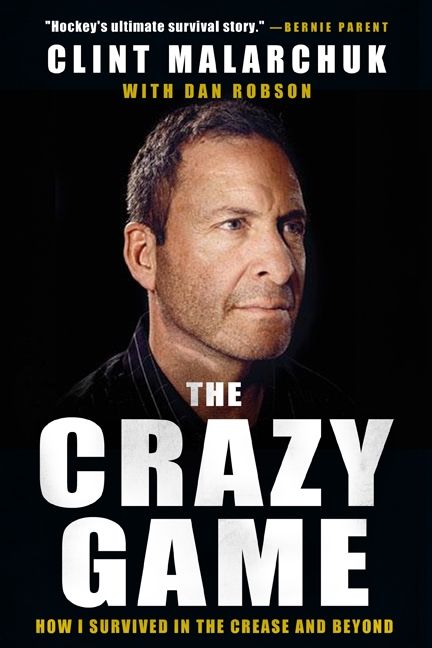 How I Survived In the Crease and Beyond

About The Crazy Game:

In the spirit of The Game and The Blind Side, a raw, raucous and unvarnished look at life between the posts.

No job in the world of sports is as intimidating, exhilarating and as stress-ridden as that of a hockey goaltender. Standing in the crease facing one-hundred-mile-an-hour slapshots, the entire game riding on your glove hand, standing on your head when necessary-all job requirements for those wanting to be the best goalies in the world. Now imagine doing that job while suffering high anxiety, depression and obsessive compulsive disorder, and having your career nearly literally cut short by a skate across your neck.

The Crazy Game takes you deep into the troubled mind of Clint Malarchuk, the former NHL goaltender for the Quebec Nordiques, Washington Capitals and Buffalo Sabres. Even as a boy, Malarchuk faced such deep anxiety that he missed school and acted out at school and with his friends. His OCD changed the way he trained, and he was almost always the last player off the ice. When his throat was slashed during a collision in the crease, Malarchuk nearly died on the ice. Forever changed, he struggled deeply with depression and a dependence on alcohol, which nearly cost him his life and left a bullet in his head.

A powerful, brave and brutally honest look inside the game, but more importantly inside mental illness. It’s a haunting book that tells a story still being written.


This is the most harrowing story in hockey if not all of sports. It would take a brave man to endure all that Clint Malarchuk has. It would take a heroic one to take readers through his battle with mental illness.


This is an amazing book. An odyssey of pain, illness, determination and triumph against long, long odds. This took courage to write and requires a strong stomach to read. I treasured it, mainly because of my respect for the author. This book will save lives.


This is a tough book written by a tough survivor. It will help a lot of people. A must read.


This is one of the most powerful books ever written by an athlete. Clint will help many others by sharing his life story. I applaud Clint for being so courageous!

Clint Malarchuk was a goaltender with the Quebec Nordiques, Washington Capitals and Buffalo Sabres. Originally from Grande Prairie, Alberta, he now lives on his ranch in Nevada. Visit him online at www.malarchuk.com and follow him on Twitter @cmalarchuk.