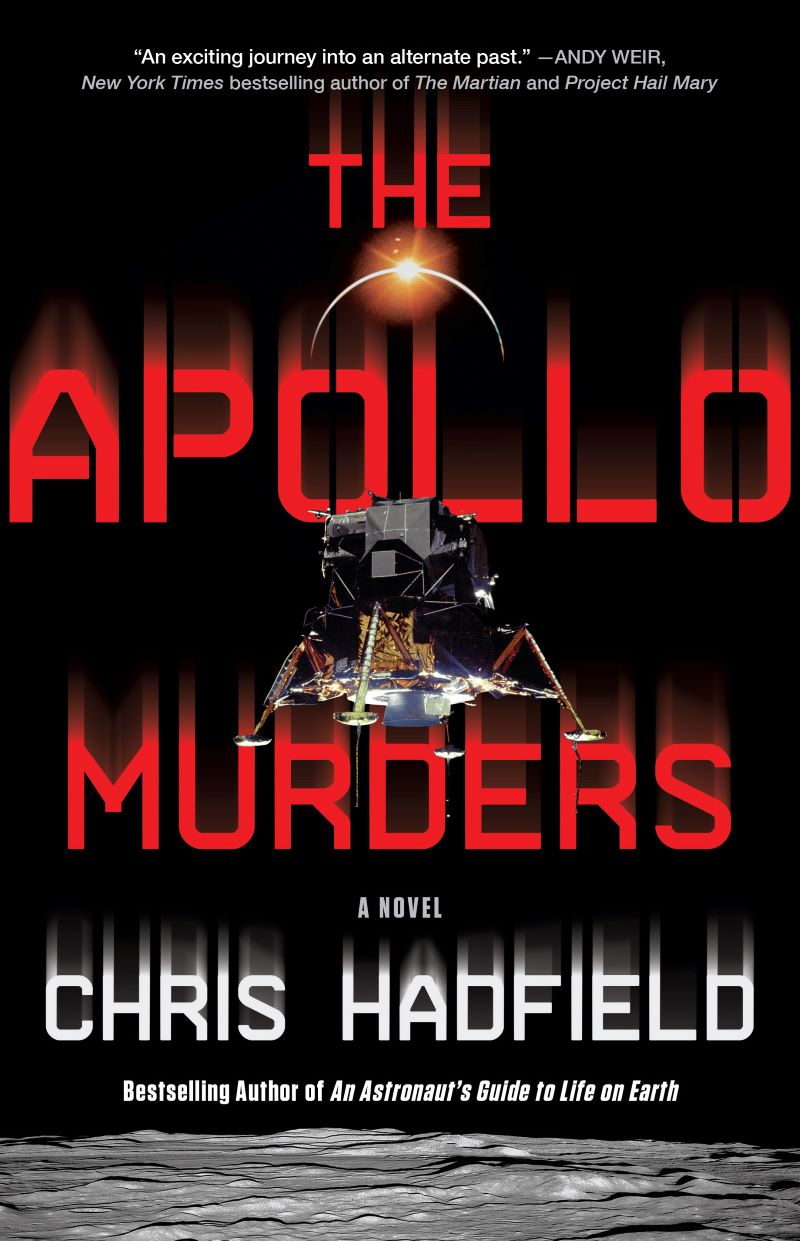 About The Apollo Murders:

New York Times bestselling astronaut Chris Hadfield is back with an exceptional Cold War thriller from the dark heart of the Space Race.

As Russian and American crews sprint for a secret bounty hidden away on the lunar surface, old rivalries blossom and the political stakes are stretched to breaking point back on Earth. Houston flight controller Kazimieras ‘Kaz’ Zemeckis must do all he can to keep the NASA crew together, while staying one step ahead of his Soviet rivals. But not everyone on board Apollo 18 is quite who they appear to be.

Full of the fascinating technical detail that fans of The Martian loved, and reminiscent of the thrilling claustrophobia, twists and tension of The Hunt for Red October, The Apollo Murders puts you right there in the moment. Experience the fierce G-forces of launch, the frozen loneliness of Space and the fear of holding on to the outside of a spacecraft orbiting the Earth at 17,000 miles per hour, as told by a former Commander of the International Space Station who has done all of those things in real life.

Strap in and count down for the ride of a lifetime.

"A nail-biting Cold War thriller set against a desperate Apollo mission that never really happened...or did it? It’s a very rare book that combines so many things I love, from taut suspense and highly realistic action, to the golden age of space exploration. I couldn't put it down."

James Cameron, writer and director of Avatar and Titanic


"There’s maybe one person on Earth with the writing chops and the expertise to write a to-the-Moon thriller this exciting, this authentic. Chris Hadfield is that guy."


"Not to be missed. Even in fiction there is authenticity. It is either there... or it is not. With Chris Hadfield it is, because everything he describes he has really seen."

Frederick Forsyth, New York Times bestselling author of The Day of the Jackal and The Fox


"An explosive thriller from a writer who has actually been to Space and back...Strap in for the ride."


"Former astronaut Chris Hadfield gives us a relentlessly exciting, deeply intriguing insider’s look at the prime years of the Apollo space program, ingeniously weaving together three of the coldest, darkest things in existence—Cold War politics, space, and murder. Hadfield also gives us a hero in former test pilot Kaz who is willing to risk both career and life to stop a trail of blood extending from the earth to the moon. Nothing short of brilliant!"


"Chris Hadfield has deftly combined fact and fiction in a gripping tale of high-stakes treachery. Told against the background of the amazing Apollo space program — this story of Cold War tensions, dark secrets, and an ego gone over the edge builds to an explosive and satisfying finale."


"Col. Hadfield’s bona fides are unimpeachable—but it’s his inventive action sequences and keen eye for illuminating details that propel THE APOLLO MURDERS ever skyward. Strap in and brace yourself, because with Hadfield at the stick, you’re in for a stellar thrill ride that’ll leave you breathless."


"Chris Hadfield's twisty thriller blasts off and turns the cold war hot, as superpower conflict erupts in the cramped confines of the Apollo module. America's final moon mission confronts even greater challenges: an armed Soviet orbiter, an aggressive moon rover, and a cosmonaut determined to draw a line in the regolith. Old-school tech is the background for machine guns in space and knife fights on the moon -- and it's all entirely plausible, written by someone who could have been there."

Mike Cooper, author of The Downside


This thriller set in the world of space aeronautics feels chillingly real. No surprise—it was penned by an actual former astronaut....We were glued to shuttle-era astronaut Chris Hadfield’s suspenseful story. The Apollo Murders has all the political backstabbing and cloak-and-dagger intrigue you’d want from a Cold War thriller, mixed with a good, old-fashioned “...IN SPAAAACE!” adventure story. And these two elements go together brilliantly."


"Hadfield draws on his expertise as an astronaut to add authenticity and realism to his debut thriller. Fans of Clive Cussler and Andy Weir will enjoy this genre-bender combining military fiction, the detective novel, and techno-thriller."


Bestseller Hadfield (An Astronaut’s Guide to Life on Earth) makes his fiction debut with a spectacular alternate history thriller...His mastery of the details enables him to generate high levels of tension from just a description of a welding error, which cascades into something significant. This is an intelligent and surprising nail-biter that Tom Clancy fans will relish."


"Real-life astronaut Hadfield’s first novel is surprisingly ambitious. We might have expected him to draw on his expertise to tell a story involving astronauts and space travel, but to set the story during the Cold War (1973, to be precise)? Interesting. To use Apollo 18, one of several canceled NASA missions to the moon, as its backdrop? Intriguing. To incorporate real people (flight director Gene Kranz, CIA director James Schlesinger) into the story? Clever. To incorporate a murder mystery and a race between nations to find a rare treasure on the moon? Gutsy. Rich in the kind of scientific and technical details that made Andy Weir’s The Martian (2014) and Kim Stanley Robinson’s Aurora (2015) such treats, the book also features very well-drawn characters, natural-sounding dialogue, and a story that leads the reader to expect a spectacular conclusion (and delivers it). Perfect for fans of sf/mystery combos."


"One of the most accomplished astronauts in the world, Chris Hadfield has drawn on his wealth of experience to produce a cold-war thriller riven with detail and authenticity."