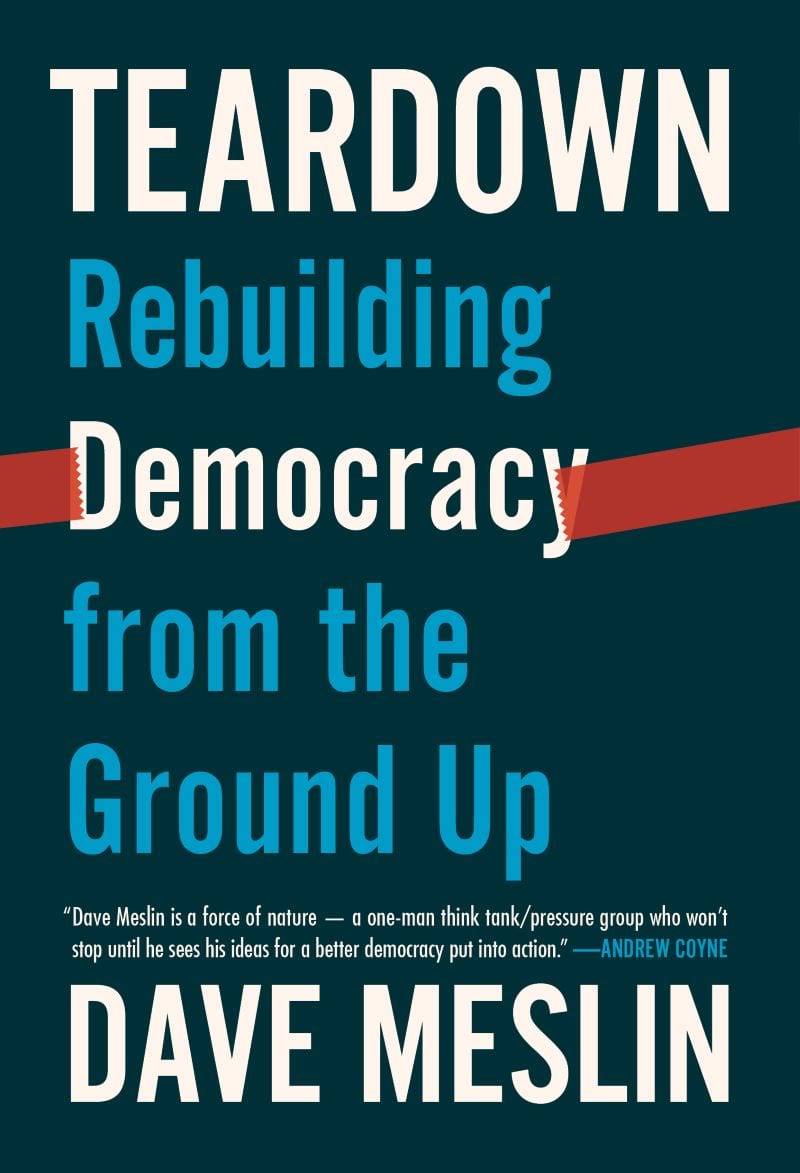 Rebuilding Democracy from the Ground Up

A handbook of democratic solutions in troubled times, from the activist the media call a “wizard,” a “mastermind,” “the ultimate ideas guy,” a “mad scientist,” a “start-up genius.”

Our democracy is a trainwreck. Our elections feel hollow and our legislatures have become toxic. Fierce partisanship, centralized power, distorted election results and rigged systems all contribute to our growing cynicism.

Voters are increasingly turning towards the angriest candidates, or simply tuning out completely and staying at home. But as Dave Meslin’s career has shown, we can fix things. We can turn elite power structures upside down. We can give a voice to ordinary people. But it means fixing things from the bottom up, and starting locally. It’s hard to change the world if you can’t change a municipal by-law. Teardown shows readers how to do both. And it will show us that these two challenges are not fundamentally different.

From environmental activism to public space advocacy to the ongoing campaign for electoral reform, Dave Meslin has been both out on the street in marches and in the back rooms drawing up policy. With Teardown he reminds us that the future of our species doesn’t need to look like a trainwreck. That we’re capable of so much more.

It’s time to raise our expectations: of the system, of each other and of ourselves. Only then can we re-imagine a new democracy, unrecognizable from today’s political mess. This book is a recipe for change. A cure for cynicism. A war on apathy.

"Dave Meslin is a force of nature — a one-man think tank/pressure group who won’t stop until he sees his ideas for a better democracy put into action."

Andrew Coyne, The Globe and Mail


"You must listen to Dave Meslin. Agree or disagree with his prescriptions, he is the clearest voice in our country talking about how to fix our democracy and improve our lives as citizens."

Dave Meslin is an activist, journalist, trainer and community organizer.