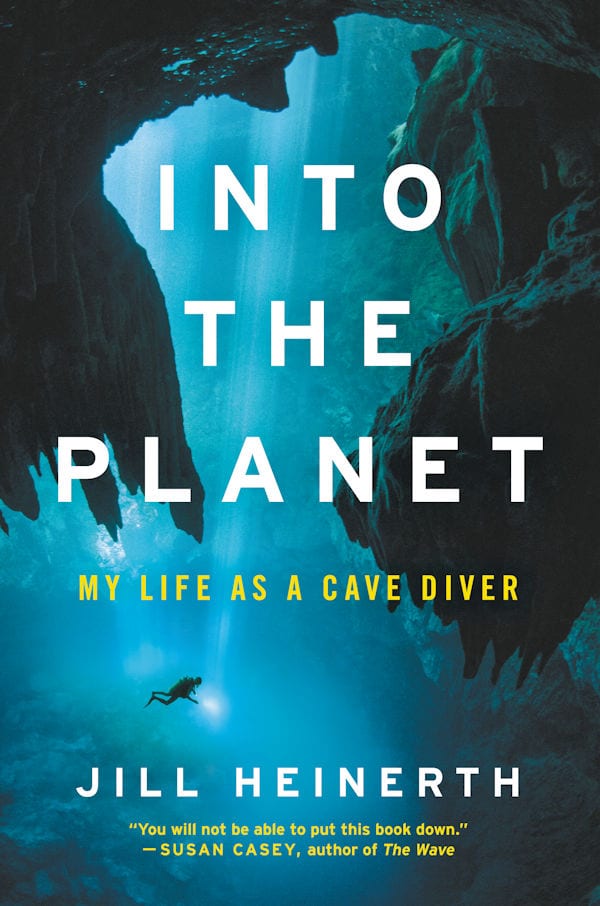 My Life as a Cave Diver

About Into the Planet:

Our underwater caves remain one of the last frontiers of human exploration and one of the few places where humans can journey to places never seen before by mankind. While intrepid individuals have been exploring underwater caves for more than half a century, Into the Planet will be the first book to give readers an intimate account of one of the most precarious yet exhilarating pursuits in the world.

Inspirational explorer and acclaimed cave diver Jill Heinerth shares her remarkable accounts and personal reflections as someone who risks her life every time she enters the cold, watery darkness where no man has gone before.

More people have walked on the moon than have been to some of the places that Jill’s exploration has taken her right here on the earth. Her extraordinary tales of adventure and survival transport readers deep into inner space, where fear must be reconciled, and a mission’s success balances between knowing one’s limits and pushing the envelope of human endurance.

Best Book of the Month – Amazon.com

"[Heinerth] delivers an exhilarating, deeply personal memoir about her career as a woman in a male-dominated profession...told with sensitivity and joyful enthusiasm, this is an inspiring story that will appeal to many, especially adventurous young women."


"I can guarantee you one thing: Jill Heinerth will not look back on her life with any regrets about a lack of bravery or passion. In this gripping, life-of-gusto story, we plunge into Heinerth's eccentric world of death-defying caves, and into her inner sanctum forged by the thrill of discovery. I read wide-eyed, page after page."


"Cave divers are another breed, which I never truly understood; that was until I met Jill Heinerth on a cave diving trip off Santa Cruz Island and had a chance to read her new book Into the Planet”, which helped to explain it all! A Must Read."


"Into the Planet is a breathtaking thrill-ride into a deeper world that exists within this one. Few people have witnessed the sublime beauty of labyrinthine underwater caves or the inside of an iceberg—to venture in for even a glimpse is to put your life at risk—but Jill Heinerth knows these realms intimately. She is the ultimate guide, and her courage and heart are as evident in her writing as they are in her groundbreaking explorations. Clear your schedule if you pick up this book, because you will not be able to put it down."

Susan Casey, author of The Wave


"Written in cinematic detail, Into the Planet is a thrilling portrait of bravery, innovation, and the extreme limits of human capability."


"The opening pages are full of tension, adventure, and survival. They set the tone perfectly for what is a superb, honest, incredibly engaging book about Heinerth's life as a one of the world's top cave divers....There is something captivating about humans pushing their physical and psychological limits to explore places no one has been to before in the name of science and knowledge. Into the Planet is a hybrid book that gives readers a lot of that while also being a captivating biography and a love letter to a sport where any small mistake can result in death — and any perfect dive can mean an amazing discovery."


"Into the Planet chronicles, in chiseled prose, a lifetime pursuing science and discovery in exploration's most lethal and least forgiving discipline. Time and again, Heinerth has ventured into realms where mishaps can, quite literally, take your breath away. Just reading about her exploits can do the same—happily with less final results."


"One sentence into the phenomenal life story of Jill Heinerth and you'll be hooked. Be prepared for a wild, wonderful and deeply inspiring journey into places few people get to know, let alone experience. Into the Planet is a beautifully crafted memoir that inspires us all to defy limits imposed, connect us to this precious planet, and follow our passions in life."


"An eye-opening, edge-of-the-seat, thrill of a read that’s destined to become a trailblazing classic of diving literature...Many of us, at one time or another, have picked up a book that’s impossible to put down until it’s been read from cover to cover. Such books are rare. Rarer still are those that – because of their ‘WOW’ factor – require the reader to take regular breaks so that they can catch their breath while the pulse rate returns to normal...[Into the Planet] is one that ticks all of the boxes in that latter category.


"Heinerth, a diver, photographer, and filmmaker, is one of the few women in the rarefied field of underwater cave exploration, a “sport” that claims more deaths than mountain climbing. Feeling at home in water as she seldom does on land, Heinerth finds an exhilarating freedom when plunged miles below the surface—despite being strapped into equipment weighing as much as 250+ pounds. In her astounding memoir she recounts her record-breaking dives to map cave networks around the world, including, most spectacularly—and dangerously—her exploration of 'the largest moving object on earth,' the Antarctic’s B-15 iceberg. But Heinerth’s rich descriptions of otherworldly seascapes, the fascinating glimpses of the technology that makes long, deep dives possible, her tales of the adventures involved in just getting to the dive sites, and the chilling reports of illness, accidents, and fatalities, are only half her story. The other half is the self-scrutiny of a talented, ambitious woman struggling with doubt, insecurity, and rampant sexism even as she sets records, leads dangerous projects, and proves herself over and over again. Launched into diving as a way to manage two traumatizing experiences when she was in college, she found her calling when she 'learned to embrace fear as a positive catalyst in my life.'"


"If there’s anybody you should be listening to about scuba diving then it is Jill Heinerth...a deeply serene and moving piece of work, it blends science and memoir to provide you with an unforgettable account of the world less explored."


"A thrilling insight into places that Heinerth has dived, many of which defy the imagination....Gripping."


"This must-read memoir looks back at an amazing career and provides insight into parts of the world that few of us will ever see in person."


"Breathtaking...Written in cinematic detail, Into the Planet is a thrilling portrait of bravery, innovation, and the extreme limits of human capability."


"A meditation on the paradoxical power of fear."


"Blending memoir, adventure and science, Into the Planet is a riveting account of Jill's journey. Or at least part of it. A life like Jill's can't be squeezed into one book, and one thing you'll take away after reading Into the Planet, is a thirst to read more."

Jill Heinerth is an undersea cave diver, photographer, acclaimed filmmaker, and underwater consultant to Hollywood.  She was the first person in history to dive into an antarctic iceberg, and she has descended further into the inner depths of our planet than any other woman in history.

Jill has worked on documentaries for PBS, National Geographic, Discovery Channel, and the BBC and her pioneering adventures and commentary have been featured in publications as diverse as Fast Company, Real Simple and Outside. A tireless advocate for our planet’s fresh water resources, Jill travels the world giving keynote speeches and presentations and imbuing audiences with a new appreciation and sense of wonder about the fascinating world right underneath our feet.  Her TED talk has been viewed over a million times.

Other Books by Jill Heinerth:

“
More people have been to the moon than to places that Jill Heinerth has explored deep inside our watery planet. A world class technical diver and filmmaker, Jill’s extraordinary path from under Antarctic icebergs to tropical blue holes is proof that real life is far more exciting than fiction.
”

“
Cave diver Jill Heinerth sold everything she owned to get away from office life and become an underwater explorer. The gamble paid off: She’s now considered by many to be the best female scuba diver in the world.
”

“
Diving with Jill Heinerth is like getting on the ice with Sidney Crosby.
”

“
Jill is a living legend. She has spent years answering the siren's call, venturing far from the beaten path, shedding light into the dark places where no one has gone before, and sharing with us all the wonders she finds.
”

“
Even readers who have never ventured into the water will identify with and appreciate Heinerth’s struggles to overcome fear, adversity, and societal expectations to establish a life of her own choosing.
”