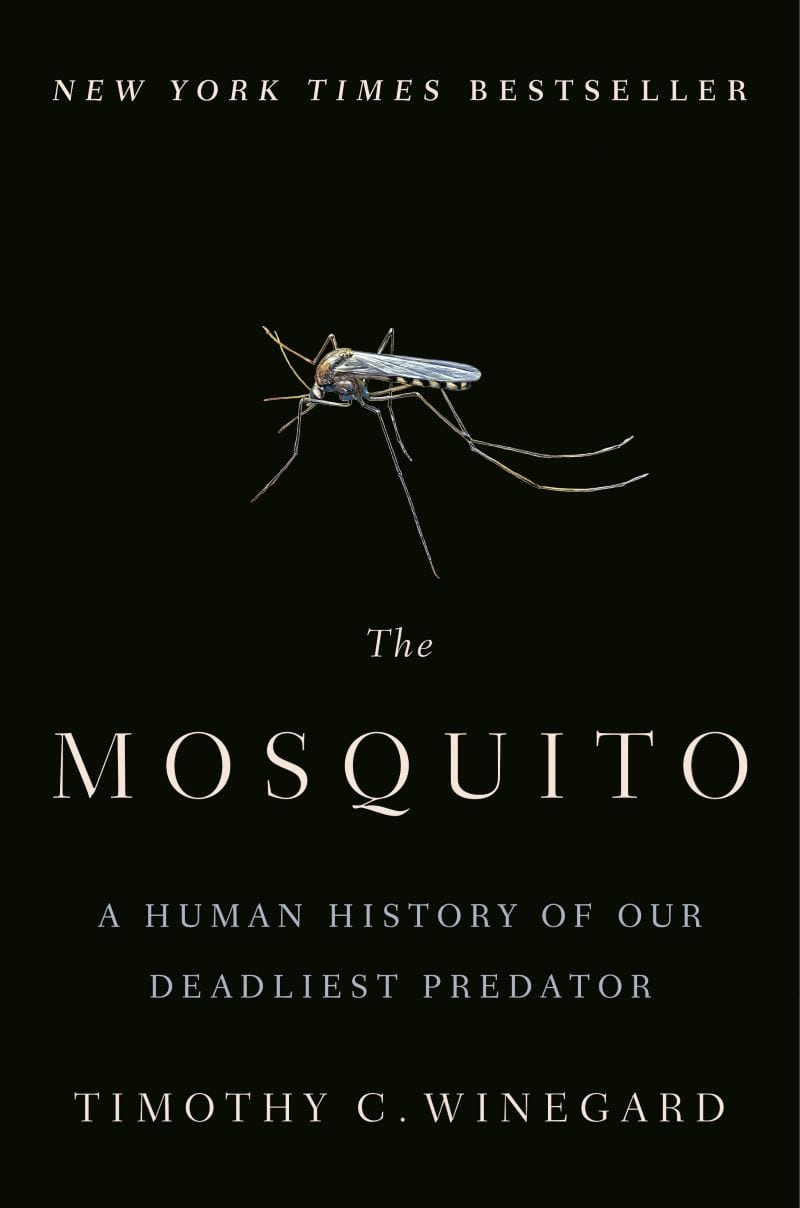 A Human History of Our Deadliest Predator

The Mosquito: A Human History of Our Deadliest Predator is the extraordinary, untold story of the mosquito’s reign through human history and her indelible impact on our modern world order. Were it not for the mosquito, America, Britain, and numerous other nations would not exist in their present form, and the victors of countless wars would have otherwise been defeated.

The estimated 100 trillion mosquitoes inhabiting every inch of the globe save for Antarctica, Iceland, the Seychelles, and a handful of French Polynesian micro-islands have killed an estimated 52 billion of the 108 billion humans across our existence.  As the greatest purveyor of extermination man has ever known, she has played a greater role in shaping our human story than any other animal with which we share our global village. No other animal has transformed human civilization and evolution so profoundly.

Surprising and enlightening, The Mosquito will be a pioneering and ground-breaking work of non-fiction that offers a dramatic new perspective on the history of mankind.

Best Books of the Month – Amazon.com

The Mosquito is one of those eye-opening books that permanently shift your worldview…Those who crave a deep dive into one world-shaking bug should grab The Mosquito.”


"Winegard’s reminder of their enormous potential for destruction is a timely one for all of us…we modern folk are also guilty of believing that our hopes and our technology will somehow make us exempt from the workings of the natural world. The entire time that humanity has been in existence, the mosquito has been proof that we are not."


"Thrilling… a lively history of mosquitoes. Mr. Winegard convincingly argues that the insect has shaped human life as well as delivering death… Mr. Winegard is an engaging guide, especially when he combines analysis with anecdote."


"Timothy Winegard’s entertaining new book, The Mosquito, chronicles the impact of mosquito-borne disease, principally malaria, throughout history. Readers of this book will no doubt enjoy Winegard’s rapid journey through many of humanity’s major population movements, campaigns, and wars."


"I have been consumed (ha!) by this book over the past few weeks, because every time I turn the page I learn something new about my least favorite common insect...Professor Timothy Winegard infuses his history of the mosquito with an almost gee-whiz level of excitement that pulls me through some of the drier bits. No additional flourishes are needed, though: The information in this book is so eye-opening that I can’t wait to get back to it this weekend."


"The deadliest beast on Earth is the featherweight mosquito....Inevitably, the insect has inspired many books. So what does the baldly titled tome The Mosquito add to the canon? The answer: a lot. Military historian Timothy Winegard’s book takes readers on a riveting adventure, documenting the mosquito’s outsized role in conflict since antiquity. ...Through this lens, he explains in superb detail how great powers rose and fell."


Timothy C. Winegard's The Mosquito is as wildly entertaining as any epic narrative out there. It's also all true...The Mosquito is an extremely well-researched work of narrative nonfiction that tells the story of the world through the lens of the role mosquitoes and mosquito-borne illnesses have played in it...The writing is engaging, and Winegard masterfully weaves historical facts and science to offer a shocking, informative narrative that shows how who we are today is directly linked to the mosquito... The result is an outstanding book that reshapes our past under a new lens."


"Readers of non-fiction, history and science will enjoy Winegard's unique take on the ever-present pest. If you can't get away from mosquitoes in your backyard, then immerse yourself in this book and learn a new perspective on this seemingly insignificant part of summer."


"Winegard’s research makes this an important book for anyone concerned with mosquito-borne disease."


"Winegard is a great storyteller who makes the icky fascinating."


"A combination of well-researched incredible scientific facts and enthusiastic, imaginative narrative, The Mosquito is a fascinating and important book, both educational and entertaining."


"At once a deep dive and a view from 30,000 feet. Timothy C. Winegard traces the history of civilization (Western, largely) through the lens of that most hated scourge of cocktail hour on your back deck. In friendly, discursive prose, he walks you through the many ways that the mosquito – more specifically, the diseases she carries – has turned the tide in major wars and has overthrown governments. When you learn, for example, that these miserable little bloodsuckers are responsible for the deaths of half the humans who have ever lived on the planet, it will lend a distinct tang of righteous retribution to the next time you manage to splat one before it’s done feasting on your ankle."


"A fascinating, fact-packed, and timely overview of human history as seen through the lens of the mosquito: carrier of fatal diseases, terminator of communities, arbiter of wars. Through millennia, Winegard argues, the mosquito has been the single most powerful force in determining the fate of humanity, steering the fates of empires, crippling economies, and killing nearly half of humanity along the way. With our former pesticides already useless, we're locked in an escalating battle with these tiny vampires. What are our chances?"


"Statistics alone are enough to stun the reader in this fascinating, in-depth and tale-driven epic of the mosquito’s role in shaping Western civilization...Timothy Winegard, a historian at Colorado Mesa University, spins the causes and effects of horrific devastations (sic) in propulsive, often lyrical and always brutally riveting prose."


"A captivating and expansive piece of narrative pop science."

Timothy C. Winegard is a professor of history and political science at Colorado Mesa University in Grand Junction, Colorado, where he teaches Western Civilizations, American History and the History of Indigenous Peoples. He received his doctorate from the University of Oxford under the direction of Sir Hew Strachan, and served nine years as an officer in the Canadian and British Forces.

“
Across our planet since the dawn of mankind, the mosquito has been at the frontlines of history as the grim reaper of death, the harvester of human populations, and the ultimate agent of historical change.
”