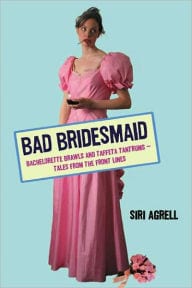 Bachelorette Brawls and Taffeta Tantrums--Tales from the Front Lines

A laugh-out-loud look at the most underrated supporting role in today’s maxed-out wedding world, featuring “bad bridesmaids” who’ve had enough taffeta to last a lifetime
I just can’t have any negative energy around my wedding.” This is what Siri Agrell’s best friend told her just before kicking her out of the wedding that Agrell had spent many months–and dollars–preparing for. Her offense? It’s not that she slept with the groom, or even the best man. She didn’t get drunk at the shower. She didn’t buy the cheapest casserole dish on the registry.
But she did question the role of today’s much-maligned bridesmaid in an article she wrote for a national newspaper. Despite the bags of fan mail the piece generated, the bride was not amused. Agrell was booted from the bridal party in favor of a similarly sized cousin–and no, she did not get reimbursed for the $100 gold shoes she’d already bought to match the bridesmaid dress.
Now she’s putting all that experience and fan mail to good use: like no other book on the market, Bad Bridesmaid is a hilarious tale of weddings gone wild, full of anecdotes and advice from women worldwide, and the perfect gift to get former, current, and future bridesmaids ready for action (or therapy). It’s time to give the bridesmaid back her voice, her independence, and the natural waistline that has long been hidden under layers of responsibility and badly constructed tulle!

Siri Agrell is a reporter for The Globe and Mail. She has covered a wide array of subjects and pop culture phenomena, and is known for turning the exploits of her twenty-something generation into thought provoking and irreverent cultural analysis. She has degrees in history and journalism and, before joining the Globe and Mail, she worked at The National Post, Saturday Night magazine, the Toronto Star and the Ottawa Citizen.